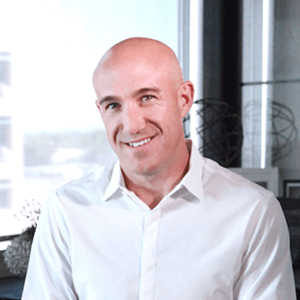 Aaron Matos is the Founder of Recruiting.com. His vision for the organization began to take shape over a decade ago when Aaron, a Corporate Director of Human Resources for an Arizona-based publishing and media company at the time, recognized the need for a better way to quickly and cost effectively recruit great local talent. As a result, he launched the local job board network, Jobing.com, as division of his employer’s publishing organization in 1999.

By 2001, Jobing.com LLC was formed, with Aaron serving as Founder and CEO, and sold from its parent publishing group to become an independent company with private equity backing. In the years following, Aaron lead the organization through a variety of new market start-ups, strategic acquisitions, and created an environment of unparalleled client service. In 2010, Aaron added Recruiting.com to the organization’s acquisition history from which he developed a full line of Software-as-a-Service recruitment solutions. The company name officially changed to Recruiting.com in 2012 to signify the expansion as a provider of cloud-based recruiting solutions and job board network.

Aaron is a graduate of Arizona State University and earned his MBA from the Kellogg School of Management at Northwestern University. He is currently a board member of the Dean’s Council of 100, a national group of prominent executives who advise the W. P. Carey School of Business at Arizona State University, and in 2010, was honored with the school’s Distinguished Achievement Award. He has been named one of The Valley’s Most Admired CEOs by the Phoenix Business Journal for outstanding people practices in 2010, Business Leader of the Year by the Arizona Business Leadership Association in 2008 and he has served on the executive committee for the Greater Phoenix Economic Council and has held a position on the Board of Governors for the International Association of Employment Websites.

Love About Work I love the opportunity to build and grow a company and all that it entails. I love helping our team grow, I love building innovative products, and I love when we help our clients improve their business.

Nerdy Addiction Besides being a nerd about recruiting; I have some off-the-wall passions. I love design and architecture. I love cycling and triathlons because of the challenge and dedication required, and proud that I'm a three-time Ironman finisher. I'm also nerdy about ponding and aquaculture. A little know fact is that I've raised bluegill to over 3 lbs (yeah, that's a big bluegill). I love the challenges of how complex biological ecosystems work, and although I love spending my career working on the Internet, I like to ensure I spend much of my time in nature and the outdoors.

Words to Live By Until one is committed, there is hesitancy, the chance to draw back -- Concerning all acts of initiative (and creation), there is one elementary truth that ignorance of which kills countless ideas and splendid plans: that the moment one definitely commits oneself, then Providence moves too. All sorts of things occur to help one that would never otherwise have occurred. A whole stream of events issues from the decision, raising in one's favor all manner of unforeseen incidents and meetings and material assistance, which no man could have dreamed would have come his way. Whatever you can do, or dream you can do, begin it. Boldness has genius, power, and magic in it. Begin it now.
- Johann Wolfgang von Goethe